First Defense contains a mixture of vitamins and immunostimulants that work together to help fish and other aquatic organisms adapt and cope when introduced to new environments and stress that can occur with poor water quality conditions.

First Defense also neutralizes chlorine and chloramine, buffers against pH changes and detoxifies heavy metals. First Defense should be used when doing partial water changes, during disease treatments and when fish are showing signs of stress. 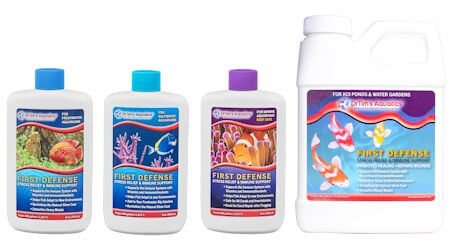 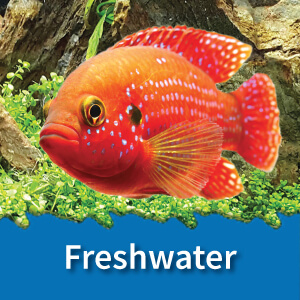 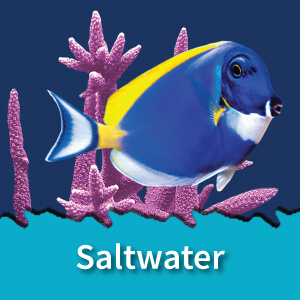 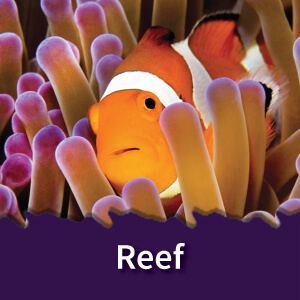 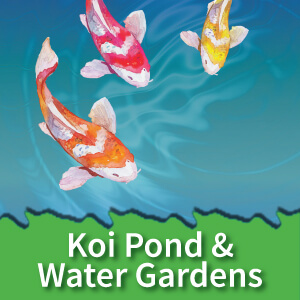 Reduce Stress in Your Aquarium

Fish and corals react to stress in many of the same ways that humans do. Stress can reduce their ability to fight off disease, resulting in poor body condition and loss of color. If the stress agents in the aquarium are not removed, the animal will eventually be invaded by opportunistic bacteria or develop a viral infection and then die.

So what are the common stress agents in an aquarium? The most common is poor water quality. But poor water quality is a rather general term, as what may be poor for one animal could be fine for another. So one needs to know some basics about the animals they are keeping. Also, the stress may be a series of problems that finally affect the fish or corals. For example, nitrifying bacteria prefer a higher pH value (between 7.5 and 8.5), and as the pH drops below this range, the bacteria do not perform as well at removing ammonia. As the pH drops below 7 and close to 6, the bacteria may stop functioning and ammonia can start to build up in the aquarium water. Constant low levels of ammonia have been shown to stunt fish growth and open fish up to bacterial diseases. So the problem (the stress agent) in this case is the ammonia, but the reason for the ammonia is the low pH of the water. Raising the pH by doing a partial water change will solve this problem, but I know of cases where hobbyists try to “treat” the ammonia, rather than fix the pH. Low pH is a common stressor in aquaria, but is easily eliminated by doing regular partial water changes.

Other stress agents are the netting-bagging-transport of fish or corals from the fish store to your house, fragging corals, fish harassing other fish and poor nutrition. Each of these can be eliminated, resulting in healthier fish and corals.

A newly set-up aquarium can be full of stressors to fish and corals. A lack of a functioning biofilter can lead to high ammonia and nitrite concentrations, the process of getting the fish and corals from the store to the tank. Just the change in water conditions from where the fish were to your new tank can all increase the stress level on the fish and corals.

Another factor to consider is that the very nature of most aquaria eliminates many natural stress relief agents that could help the fish deal with the stress agents they encounter. Hobbyist strive to have “gin clear” water and an algae-free aquarium, down to cleaning the rocks and other decorations, all of which eliminates things that can be helpful at relieving stress. Many algaes and the small organisms that feed on them, that are eaten by fish or filter-feeding corals, provide vitamins, minerals and other important products that help fish and corals fight stress when it arises.

One way to help your fish and corals fight stress, besides providing good water quality and nutrition, is by periodically adding a scientifically formulated, stress relief product such as DrTim’s Aquatics First Defense. First Defense contains, among other things, a mixture of vitamins, immunostimulants and a slime coat replacement substance, all of which promote healing and repair wounds.

First Defense can also stimulate feeding in fish that don’t seem interested in eating. You might be thinking, “How can it do that when the fish aren’t eating in the first place?” The answer lies in the basic physiology of fish. Freshwater fish are “saltier” than the water they are in, so aquarium water is automatically absorbed by osmosis through the skin and gills, along with whatever is in the water. So adding the vitamins in First Defense to the aquarium water means those vitamins will be absorbed into the fish, in turn helping the fish fight stress.

Saltwater fish have the opposite situation in comparison with freshwater fish. Saltwater are continually losing their internal water to the aquarium so they must constantly drink aquarium water to replenish the water loss. Therefore, any vitamins, minerals and other stress relief agents in the water are ingested along with the water.

As mentioned earlier, many stressors open the fish up to what are called secondary bacteria diseases. Secondary in this case means that the bacteria were not the initial stressor of the fish but now that the fish are stressed, they are more susceptible to bacterial infection.

There are two ways First Defense helps to fight off bacterial diseases. Firstly, bacteria need an invasion point or spot to gain entry into the fish. This spot usually occurs where the natural slime coat of the fish has been lost either by being rubbed off or the fish losing a scale. First Defense contains polymers that act to replace the slime coat and help ward off infection points.

Secondly, for bacteria and viruses to be effective, they must overwhelm the natural defenses of the fish or coral. A simple explanation of how they attempt to do this is by not signaling their presence to the fishes’ immune system until they have sufficient numbers to invade and defeat the immune system. DrTim’s Aquatics First Defense contains immunostimulants that naturally turn on the immune system so it is not surprised by any bacterial or viral invaders, and will be ready to fight them.

Eliminating stress in your aquarium is not difficult: providing good water quality, a balanced diet and supplementing with DrTim’s First Defense will go a long way to maintaining a stress free aquarium environment.